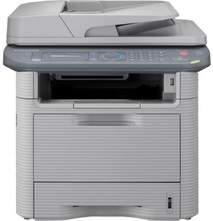 This machine, Samsung SCX-4833 model, has, first of all, an automatic double-sided printing, also known as a duplexer. The function of this feature is to print on both sides of the pages on its own. The printer also produces a resolution of up to 1200 x 1200 dots per inch (dpi). Whereas it provides the first page in less than 6.5 seconds after issuing the command to print. The maximum size of the compatible paper in the device is the A4.

Then, at full operation, the production is at the rate of 31 pages per minute (ppm) on an A4 paper. While scanning, this machine can produce an optical resolution of 1200 x 1200 dpi as well with the color CIS component. Furthermore, copying provides a copy rate of 31 ppm for the monochrome copies at 1200 x 1200 dpi quality. Then, it can zoom in or out of a document to produce an enlarges or reduced text, respectively.

The limit of enlargement is up to 400%, while that of reduction is up to 25% of the original document. However, if the copying is through the automatic document feeder (ADF), the maximum enlargement can only be 100%. When using the faxing feature, the modem speed is about 33.6 kbps. Then, the machine has interface types that include the Ethernet LAN and the USB 2.0 hi-speed port.

The system specification of this machine includes an inbuilt processor that runs at the speed of 360 MHz. In support of the processor capacity, there is also a standard internal memory that stores up to 128 MB of data. This memory is, however, expandable to 384 MB of RAM. This machine is also very compatible with Microsoft Windows OS, Mac OS, and Linux OS versions. By the way, it can make up to 50,000 pages of production in a single month. Download Samsung SCX-4833 driver from hp website