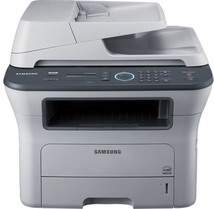 The Samsung SCX-4828 model of printer belongs to the Samsung SCX-4820 printer series with a laser print technology. The machine is a monochrome device that only produces black and white documents and not color. It also displays the status of the machine on a liquid crystal display (LCD) screen. This LCD screen supports two lines and 16 characters for the quantity. Also, the monthly capacity of the print machine can reach up to 30,000 impressions.

The standard internal memory of the Samsung SCX-4828 printer reaches up to 128 MB but is expandable to 384 MB of RAM. In terms of the Microsoft certifications, the supported version is Microsoft Windows Vista. It has one black cartridge as the basic consumable of a capacity of up to 2000 pages at maximum production. This cartridge is replaceable with other compatible cartridges when it runs out of its resource.

While copying, the rate of work is up to 30 pages per minute for an A4 paper, whereas the copy resolution is up to 1200 x 1200 dots per inch (dpi). Its first copy comes out only in less than 15 seconds after issuing the command to copy. It can enlarge the output to 400% of the original while the reduction is to the 25% limit. Then, there is an automatic duplexer with a multicopy feature that can produce up to 99 copies.

Printing is at the rate of 30 ppm as well, while the resolution is up to 1200 x 1200 dpi. The supported printer drivers or languages include IBM ProPrinter, PCL 5e, postscript three, and PCL 6. It also supports MS Windows XP, MS Windows 2000, Server 2003, Vista, Linux, Mac OS X 10.1 to 10.4 versions. This machine produces a sound emission of up to 50 dB during full operation to optimize resources. Download Samsung SCX-4828 driver from HP website