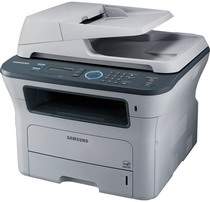 Samsung SCX-4826FN model is a digital type of printer with incredible qualities that astonishes the user. It uses the laser print method to produce top quality output at high speed. In a month, this machine can produce up to 50,000 impressions at its optimum productivity. It also has a display component in a liquid crystal display (LCD) that has two lines and 16 characters. Also, there is a standard non-expandable memory of 128 MB of RAM that supports the inbuilt processor.

The printer package contains a black cartridge that can produce up to 2000 pages of printed sheets. Then, in terms of the approved Microsoft certifications, the printer can work with Microsoft Windows 7. Then, the copying mode of this printer will run at the rate of 30 pages per minute (ppm) on A4 paper. However, it takes less than 10 seconds for the machine to produce its first copy out in black and white.

This copying feature can also zoom in and out of the captured image of the original. The lowest limit of reduction is 25%, while the highest limit of enlargement of the image is 400%. Other astonishing features of the machine include an ID copy, 2-up, and 4-up production. Also, it can produce multiple copies of up to 99 from a single original document. This machine has an energy start certification that ensures that it remains safe for use in the environment.

Printing is at a maximum resolution of up to 1200 x 1200 dpi and a speed of up to 30 ppm. That rate applies to the use of A4 sized paper, so using letter size runs at a speed of 30 ppm. The supported operating system versions include Microsoft Windows XP, 2000, 2003 Server, 2008 Server, and Vista. Other versions apart from Microsoft Windows include Apple Mac OS X 10.3 â€“ 10.5 and Linux OS versions. Download Samsung SCX-4826FN driver from hp website