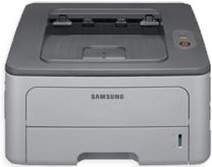 This printer is another member of the Samsung ML-2850 printer series with outstanding print specifications. Some physical characteristics of the printer include a width of 14.3 inches and a depth of 14.5 inches. However, the height of the machine is 8.3 inches, which is equivalent to 210 mm. In a typical environment where the printer is in use, the temperature should remain between 10 and 320C during operation. On the other hand, the relative humidity should be between 20 and 80% without condensation.

The machine also supports PCL 6e, IBM ProPrinter, EPSON, PostScript 3, and the Samsung Printer Language (SPL). It also has an internal memory of 32 MB of RAM but is expandable to 160 MB at maximum capacity. Aside from this memory, there is an optional memory that is also available memory compatible with Samsung approved DIMM. The package weighs 2.4 kg in a paper package, but a plastic box is about 0.3 kg. At the same time, the machine itself weighs 8.99 kg, including the consumables.