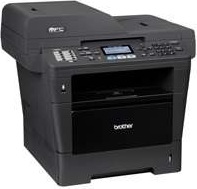 The Brother MFC-8810DW printer model has new specifications such as multiple functions of printing, scanning, copying, and faxing. This model belongs to the same family series as MFC-8510DN, MFC-8710DW, and MFC-8910DW. It is also a laser-based technology printer using the electrophotographic method. The printer comes with an internal memory of about 128 MB for storing up essential data for processing. This memory is expandable to 256 MB in a slot of DDR SO-DIMM.

There is a control panel that contains a liquid crystal display (LCD)that supports 22 characters and two lines. The power source of the printer allows a supply between 110 and 120 volts of an AC at 50/60 Hz frequency. Also, the power consumption is dependent on the performance and print modes of the printer. For instance, the peak performance requires an approximate power of 1200 watts at 500C. The copying mode uses up to 687 watts at the same temperature but at the quiet method, uses 325 watts.

The faxing specifications include compatibility with the ITU-T super group 3 and a modem speed of 33600 bps. Also, the coding system that works for this printer includes MH, MMR, MR, JPEG, and JBIG formats. The printer also works with a duplex feature which allows printing on both sides of the page.