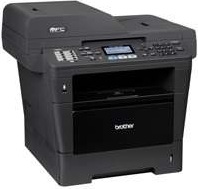 The Brother MFC-8910DW printer model belongs to the same series as the MFC-8510DN printer model. The printer uses an electrophotographic laser print technology and a standard memory of 128 MB of RAM. There is an optional memory of 1 slot DDR2 SO-DIMM that can take up to 256 MB. The printer possesses a liquid crystal display (LCD) touchscreen of 22 characters and two lines. The power source of the printer is through an alternating current of 220 to 240 volts with 50/60 Hz.

The power consumption of the printer on the average depends on the printer mode that may include printing and copying. The peak performance of this printer uses approximately 1200 watts at 250C. The copying mode reasonably requires 694 watts but 350 watts at quiet mode. The deep sleep mode, on the other hand, uses about 1.4 watts. The effective method uses about 8.1 watts and approximately 6.3 watts in the sleep mode when the LAN is on.

Brother MFC-8910DW printer model has a width of about 491mm, a depth of 415mm and a height of 447mm. The weight of this printer, on the other hand, is about 16.7 kg. The produced noise level is up to 59 dB while printing and 37 dB while ready to print. The temperature range is about 10 to 32.50C for operations and a storage temperature range of 0 to 400C. However, humidity ranges between 20 and 80% without condensation for activities and 10 to 80% for storage.

The automatic document feeder (ADF) component of the printer acts as a supplementary supply and can hold 50 pages. For the best results, users are to maintain the environmental conditions such as the temperature and humidity range. The supported document size include 147.3 to 215.9 mm in ADF width and a length between 147.3 to 355.6 mm. Download Brother MFC-8910DW driver from Brother website