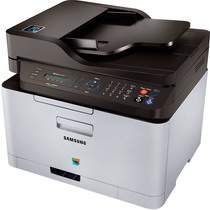 The Samsung Xpress SL-C460 model of printer uses laser print technology that is cable of both color and monochrome printing. Its display component is on the control panel and displays two lines of the printer status. On the one hand, the duty cycle of the printer in a month is up to 20,000 impressions. Whereas, the office machine features include the ability to save to USB flash drive, scan to folder, and scan to application.

At the same time, the mobile printing feature has a Google Cloud Print feature, which stands out among many others. The standard internal memory of the printer is up to 128 MB of RAM with two types of cartridges. A black toner cartridge in the machine can print up to 700 pages while the tri-color will print 500 pages. In terms of power consumption, the usage varies according to the printer modes.

For instance, when the printer is in sleep mode, it consumes about 1.7 watts of power. On the other hand, the standby mode uses 60 watts during the operational consumption of about 290 watts of power. When copying, the Samsung Xpress SL-C460 model runs at the speed of up to 19pages per minute (ppm) for monochrome. Whereas, when copying in color, the rate is about four ppm. It takes only about 14 seconds for the first page to come out.

Also, the copying process can enlarge the document image up to 400%, while reduction can reach 25% of the original. The maximum printing resolution is up to 2400 x 600 dots per inch (dpi) for monochrome and color printing. Printer driver and emulation options include PCL 5c, PCL 6C, postscript 3, SPLC. The operational sound emission is up to 52 dBA, while the maximum supported size is A4/legal. Also, the supported weight range is between 60 and 220 gsm. Download Samsung Xpress SL-C460 driver from hp website