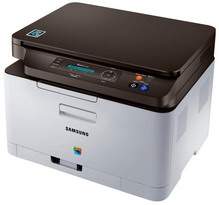 Some of the outstanding features of the Samsung Xpress SL-C480 printer model include the rendering engine for the clean page (ReCP). It is also a color printer that can also print in black and white with laser print technology. The display component of the printer is also on the control panel with a display in 2 lines. It can also produce up to 20,000 pages in a month at maximum productivity level. However, the recommended range is between 100 and 500 pages on average.

Some of the notable office machine features include the rendering engine for clean page (ReCP) technology. Others include the ability to scan to PC, and the JetDirect EIO features. Then, its mobile printing features also include Apple AirPrint and the Mopria Print Service. It also has a standard internal memory of 128 MB at the optimum capacity. Then the color management features include Smart CMS, which stands for Smart color Management System.

The printer consumables include a black toner cartridge that can print up to 700 pages. Otherwise, the other three that print in cyan, magenta, and yellow can print 500 copies each. The power properties of the Samsung Xpress SL-C480 machine require a voltage of up to 230 volts at a frequency of 50/60 Hz. In terms of the printer consumption of power, the sleep mode uses only as little as 1.2 watts. But the standby mode uses about 60 watts while the operational power consumption is up to 290 watts of power.

The input tray capacity of this printer is up to 150 sheets of plain paper with a weight range of 60-120 gsm. Conversely, the output tray will only accommodate about 50 sheets of plain paper. This machine also has an automatic document feeder (ADF) with its paper size capacity and dimension. Download Samsung Xpress SL-C480 driver from HP website