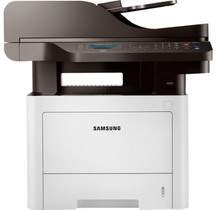 Samsung ProXpress SL-M3875 model is a multifunction type of device that can complete efficient print work. It displays the printer status through a 4-line touchscreen panel with support for standard fonts. The model of printer can also produce up to 80,000 pages in a month at an optimum productivity level. On the other hand, the recommended print volume of the machine is between 1500 and 3500 pages in a month.

In the same way, it contains many other astonishing features that give a good value return for money. For instance, the office machine features include a scan to e-mail, scan to folder, 10-key numeric keypad, and mobile printing. Other options include fax to e-mail, fax to PC, Samsung Cloud Print ready, fax to SMB, and fax to FTP. This printer also supports various mobile printing abilities such as Apple AirPrint, Wireless direct printing, and the Mopria print service.

Copying with this device also ensures a speed of up to 38pages per minute (ppm), which is similar to printing. Whereas, the resolution is 600 x 600 dpi, a rate that is also similar to printing and scanning. It can also enlarge the image size up to 400% or reduce to the extent of 25% of the original size. Users can also be sure of the quality of this energy star rated machine to be safe for the environment. Download Samsung ProXpress SL-M3875 driver from hp website