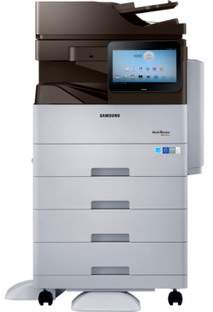 The Samsung MultiXpress SL-M4370 model is a classic choice of printer belonging to the SL-M43X0 printer series. On a general note, it is an all-in-one device or multifunction printer that can print, copy, and scan documents at the impressive quality. In order to connect with the machine, the options include an Ethernet LAN 10/100/1000 Base-TX feature or USB 2.0 hi-speed device and host. What it produces can only be in black and white or merely monochrome printing.

Copying with Samsung MultiXpress SL-M4370 implies a speed of up to 43 copies per minute. Also, the copy resolution is up to 1200 x 1200 dots per inch (dpi) for the same black and white copying. While printing, the machine uses a laser print technology that ensures users optimize the available print resources. Its maximum print resolution is also about 1200 x 1200 dots per inch (dpi).

Whereas, it also has a duplex printing component that allows printing on both sides of the paper. Scanning is at a resolution of up to 600 x 600 dpi as well. But the machine on a general note can still produce up to 9999 copies from a single original through copying., and it also has a duty volume of up to 250,000 pages in a single month without compromising the quality. However, the manufacturer recommends a much lesser amount to keep the printer in the best shape.

The physical scopes of this printer include a height of 63.6cm, a width of 50.6 cm, and a width of 63 cm. Also, the weight reaches up to 49 kg, which is still relatively lighter than many other models of similar functions. Users can also note that this machine has an energy star rating, and that means it is very safe for use in the environment. Download Samsung MultiXpress SL-M4370 driver from hp website