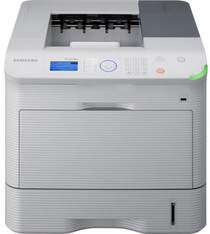 The Samsung ML-6510 model is one of the worldâ€™s fastest Printer low CPP printer with a 2-piece toner cartridge system. Also, in black and white printing, the first print out time is as fast as 7.8 seconds. The print resolution is also up to 1200 x 1200 dots per inch (dpi) for productive output. In terms of the printer emulation, the recommendation includes EPSON, PCL5e, PCL 6, KS/KSSM, KS5895, IBM ProPrinter, and Postscript3. Others include PDF Direct v1.7 and XPS v1.0 formats.

This machine also includes a built-in duplex component for printing on both sides of the paper. Its input tray can hold up to 520 sheets of plain paper while there are an extra 100 sheets of the multipurpose tray. This capacity allows a maximum weight of 80 gsm when using plain paper. On the other hand, its output tray will hold up to 500 sheets of paper in a face-down pattern. But there are two different optional trays of 50-sheet capacities each.

The supported media types include printer default, plain paper, thick paper, thin paper, bond paper, color paper, and cardstock. Others include labels, transparent films, envelopes, preprinted paper, recycled paper, archive paper, and extra-thick paper. It also has an inbuilt processor of the Samsung processor that runs at a speed of up to 700 MHz. Also, there is an internal memory of up to 256 MB of RAM but is expandable to 768 MB.

In terms of the printer noise during printing, the minimum noise is about 30 dBA as the background noise on standby. But during printing, the sound can be less than 58 dBA. Whereas, Samsung ML-6510 model can produce up to 275,000 sheets of plain paper in a month. But the manufacturer recommends a much lesser range to keep the printer in good shape. Download Samsung ML-6510 driver from hp website