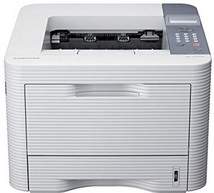 This model of Samsung printer, Samsung ML-3750ND, also belongs to the Samsung ML-3700 printer series. However, it is exceptional because it has defined characteristic features that make it unique and set apart from others. This machine is a workgroup printer that uses modern laser print technology to produce black and white documents only. Furthermore, it has an internal power supply with an operational power consumption of 550 watts at optimum.

Whereas, its power consumption varies according to the present model of the printer. As a result, the usage of the sleep mode is the least power consumption for the printer model. The rate of print for this machine is up to 35 pages per minute (ppm) for black and white printing. This rate applies to publication on an A4 paper. But when printing on a letter-size paper, the rate is up to 37 ppm for the same monochrome printing.

Users can see the status of the printer on the liquid crystal display (LCD) screen with a few buttons. The user interface options include a standard USB 2.0 port and a Gigabit LAN cable connection. It also has an automatic duplexing feature for printing on both sides of the sheet. With a first page print out rate of 6.5 seconds, distribution is at another level with the Samsung ML-3750ND model. Then, this machine is compatible with the Windows 7 operating system version.

The machine supports the use of various print language simulations that include EPSON, IBM Proprinter, PCL 5e, and the postscript. Others are Samsung Printer language (SPL), and the PCL6 language simulations. Also, more specifications as regards paper handling, include support for bond paper, index cards, envelopes, cotton, and thick paper. The media tray for the paper input load can take up to 250 sheets with an extra 50 sheets in the multipurpose tray. Download Samsung ML-3750ND driver from hp website