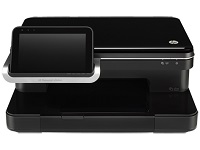 This unique printer has a part number of CQ140A. HP Photosmart eStation C510a driver supports Windows XP, Tablet PC edition (SP1 or later) (32-bit only), Windows Vista and Windows 7 (32-bit or 64-bit). The minimum requirements include an Intel Pentium II, Celeron with a 128 Mb of RAM. Also, there must be a free disk space of 1.2 GB.

This printer has a portable size which includes 9.74-inch height, a width 17.68 inch and a depth of 15.31 inch. The printer weight is moderate 18.2 lbs. These dimensions are when the control panel and the tray extender is down and closed.

Compatible cartridges include HP 564 (for Americas and the Asia Pacific) and HP 364 for Western Europe. Others include HP 178 for Africa, CIS, Japan and the Middle East and HP 862 for China and India.

The printer supports plain paper of input capacity of up to 125 sheets and an output of 50 sheets. The supported media types of this device include legal, plain paper, envelopes, transparent films, hagaki, photo paper, and index cards.

Printing specifications include a resolution of 9600 dpi, a drop-on-demand thermal inkjet print technology. Also, the print speed varies according to the complexity of the document and the model of the printer in use.

Copy specifications include digital image processing with a copy speed that also varies according to the model of the printer. The zoom range of the copy function is 200 to 400% when enlarging and 25 to 50 % reduction.
Scan specifications have an image editor with twain compliance using a software.