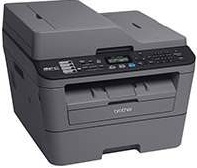 The Brother MFC-L2680W model printer is a multifunction device which can print, copy and scan documents. The printer works by the modern electrophotographic print technology that maximizes the printer resources. This device is also capable of producing high-quality output and at high speed. The internal memory is about 32 MB of RAM in addition to the inbuilt processor that makes this feature possible.

The display component comprises a liquid crystal display (LCD) that supports about 16 different characters and two lines. This feature measures about 2.7 inches (about 67.5 mm) in diagonal color touchscreen. The power source of the device supplies a voltage range between 110 and 120 volts of an AC at 50/60 Hz frequency. The power consumption of the printer is a function of the present process going on with the device.

For instance, at the peak performance, the printer consumes up to 1104 watts of power. The printing and copying processes of the printer are approximately 410 watts at an average temperature of 230C. However, when these processes take place in the quiet mode, the power consumption reduces to about 313 watts at the same temperature. At active status, the power usage is about 60 watts of power while the sleep mode requires 5.8 watts.

The deep sleep mode is approximately 2.1 watts, but at power off way, the approximate power usage is 0.02 watts. The printer’s height is about 12.5 inches, the width measures about 16.1 inches and the depth are 15.7 inches. Also, the weight of the Brother printer is about 11.2 kg, which is up to 24.7 lbs.

Specific environmental features must be in place to obtain the maximum performance of this printer. Such factors include a temperature range between 10 and 320C during operations and 0 to 400C in storage. Download Brother MFC-L2680W driver from Brother website