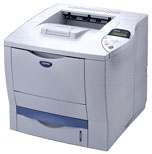 This printer, the Brother HL-7050, is an outstanding model with unique properties that set it apart from others. For a start, this device runs the modern electrophotographic print technology that is responsible for excellent speed and quality. The invention also runs at an average rate of 30 pages per minute when printing on letter sized paper. The time for the first print for this printer is also less than 11 seconds after issuing the command.

The obtainable print resolution from the device is according to the operating system version in use. However, the maximum resolution in all compatible version of Windows and Mac is 1200 x 1200 dots per inch (dpi). Similarly, the HRC version allows an average resolution between 300 and 600 dpi. The printer has an inbuilt processor of the Toshiba product model TMPR4955 that runs at a speed of 266 MHz. This feature gets support from the internal memory standard capacity of 32 MB of RAM.

The supported printer languages include the PCL6, BRScript 3, IBM Pro Printer XL, Epson FX-850, and HP-GL. The compatible fonts include 66 scalable fonts, 12 bitmap fonts, and 11 barcodes. However, this memory is expandable up to 288 MB using the 2 DIMM slot in a gradual range multiple of 16. The connection interface options for this printer model include the typical USB RS-232C serial port. Others include a connection through the Ethernet 10/100 base TX and IEEE 1284 parallel connection.

The display component of this printer involves two types of light, including the liquid crystal display (LCD) and the LED. The LCD appears in two lines with 16 digits and three colors for each status indication. The LED is just one while there are also seven different keys on the printer, such as go, cancel, and menu. Others include reprint, back and two scroll keys among options.