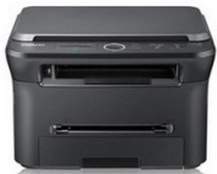 The Samsung SCX-4610K model of printer is a member of the Samsung SCX-4610 family series of printer. It is also a digital copier type of printer that uses laser print technology. The display component is a liquid crystal display (LCD) screen that supports two lines and 16 characters on the show. In total, this machine will produce up to 12,000 impressions in a single month at maximum performance.

By standard, the internal memory of the Samsung SCX-4610K printer is up to 64 MB that is non-expandable. Furthermore, it connects using wired connectivity in addition to the standard USB 2.0 hi-speed port. The first print out time for the black and white is less than 9 seconds as a multifunction printer. Some of the prominent consumables are the black cartridge that can produce up to 2500 pages at best performance.

During the copying process, the speed is up to 23 pages per minute (ppm) and a resolution of 1200×1200 dpi. The maximum document for enlargement is up to 400% of the original size. On the other hand, the reduction range is up to 25% of the original size. It can also produce up to 99 copies from a single original document. Other exciting features include the 2-up, 4-up, and the ID card copy.

The compatible operating system support includes MS Windows XP, 2000, 2003, 7, Vista, and Server 2008. Apart from Windows OS versions, the others include Apple Mac OS X 10.3 – 10.6, and Linux OS versions. When the printer is idle, the sound emission is about 26 dB while the operating discharge is up to 50dB. The maximum media size that this printer supports is the A4 or legal size of plain paper.

There are possible 250 sheets of plain paper that can adequately fill the input tray. Whereas, the output tray will hold only 80 sheets of printed paper. A maximum paper size, the dimensions include 8.5 inches x 14 inches for the original type. Download Samsung SCX-4610K driver from HP website