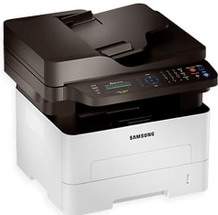 The Samsung Xpress SL-M2875 machine uses laser print technology that is essential for the optimization of print quality and value. It also has a control panel that shows up to 2 lines of display with support for 16 characters. The maximum productivity of the machine is up to 12000 impressions in a single month. However, the producer recommends that the user retains the production range between 250 and 2000 pages.

Similarly, the standard internal memory of the Samsung Xpress SL-M2875 machine is up to 128 MB of RAM at the maximum reach. It takes about 8.5 seconds to produce the first printout time when printing in black and white. In terms of the printer consumable, there is a black cartridge that can create up to 1200 pages in monochrome. The power consumption rate when the printer is at the sleep mode is about 0.9 watts.

When it is at the standby mode, the rate is about 45 watts, while the operational power usage is about 400 watts. In the copying mode, the speed of work is up to 29 pages per minute (ppm). But the maximum resolution is about 600 x 600 dots per inch (dpi) with its fabulous features. The other copying features include poster copy, ID card copy, 2-up, and 4-up. It is also compliant with the EPEAT bronze rating and also has an ENERGY STAR rating.