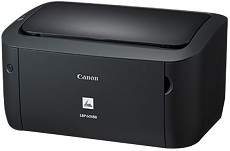 Canon LASER SHOT LBP6018B printer model represents a desktop page printer with an electrophotographic print method. This method is suitable for on-demand fixing and can produce a print speed of up to 18pages per minute (ppm). But the warm uptime of the machine from the power saver mode to print-ready is 10seconds or less. It also has a first print time of 7.8 seconds when printing on A4 paper.

The machine supports standard paper sizes that include A4, A5, letter, legal, B5, executive, envelopes, and custom paper sizes. Also, the capacity of the main input paper tray is approximately 150 sheets of plain paper. On the other hand, the output tray capacity is up to 100 sheets in a face down pattern. At the standby mode, the noise level is inaudible but reaches 6.34 B or less during the printing operation.

Some environmental factors must be in place before this printer can perform at its best capacity. One such factor is the temperature, which should be within the range of 10 and 300C. Whereas, the recommended relative humidity range is between 20 and 80% without condensation. It supports the USB 2.0 hi-speed interface host. But the user interface comprises of two LED indicators and one operational key for user’s ease.

In terms of the power specifications, the printer uses a power supply between 120 and 127 volts of an AC. Besides, at this voltage, the maximum power consumption is about 850 watts or less. But during operation, the power usage is 310 watts approximately while the standby is 1.6 watts. Whereas, the average usage during the power save mode is about 1.3 watts. The leading printer consumable is a Canon cartridge 725. It is important to note that when this printer is off, the power consumption is only slightly lower. Download Canon LASER SHOT LBP6018B Printer driver from Canon Website