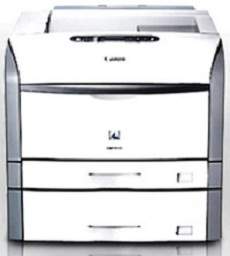 Users that choose the Canon LASER SHOT LBP5970 printer model enjoys a desktop color laser printer. The copying method of the device is the electrophotographic method, along with the color RAPID fusing system. It also has a developing policy with a dry dual-component developing system. When printing on a letter-size paper, the rate is about 31 pages per minute (ppm). Also, the first printout time is about 7.5 seconds for black and white printing.

But the color printing for the first time is about 9.0 seconds while the warm-up time is 30 seconds. The machine Canon LASER SHOT LBP5970 has an internal processor that can run at a speed of 400 MHz for the R4000 series. But for the MIPS64 series, the processor speed is about 533 MHz. in addition to the processor, the machine also has an internal memory space of 256 MB of RAM by the standard. But the maximum internal memory is 768 MB of RAM.

At the same time, it has optional hard disk storage of up to 30 GB. The page description language of the machine is the UFR II, PCL 5c, or PCL6 with optional PDL support. At the super fine mode, the print resolution is 1200 x 1200 dots per inch (dpi). Also, the excellent method produces a resolution of 2400 x 600 dpi equivalent. The connectivity options of this printer include a network interface connection of 10/100 Base-TX.

Other options include wireless LAN (IEEE 802.11), the USB 2.0 hi-speed port, and others. On the control panel, there are also 11 LED indicators and nine operating keys. These features also include an LCD user interface that comprises of 16 characters and one line. The supported paper sizes for the machine include the ledger, legal, letter, and executive. Apart from these sizes, the device also supports custom sizes with weight support between 17 and 28 lbs. Download Canon LASER SHOT LBP5970 driver from Canon Website