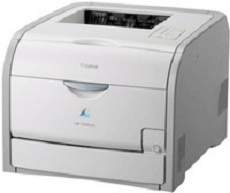 The particular printer, Canon LASER SHOT LBP5960 model, is a desktop color laser printer. It uses the electrophotographic print method with a color on-demand fusing. It also runs the dry dual-component developing system. The rate of printing is 30 pages per minute when running on a letter-size paper. Besides, the first print time is 7.5 seconds for black and white printing and 9.0 seconds for color printing.

On the other hand, the warm-up time for the machine after the power-on mode is about 30 seconds or less. The device also has a PowerPC 750CXr processor that runs at the speed of 400 MHz. Also, it has an internal memory of 128 MB of RAM that is expandable to 384 MB of RAM. It also has a hard disk drive of 20 GB, but this feature is optional. In terms of the page description language, the options include UFR II and PCL 5c.

The printer resolution of the UFR II is 1200 x 1200 dots per inch (dpi) for the superfine mode. However, at the excellent style, the resolution 2400 x 600 dpi. Also, the compatible operating system versions include Windows 2000, XP, Server 2003m and Citrix MetaFrame. Apart from Windows OS, it is also compatible with Macintosh OS 10.2.8 or later versions. The interface options of the machine include a parallel connector and a USB 2.0 hi-speed port.

The body of the machine also contains a user interface of liquid crystal display with 16 characters and one line. It also has 10 LED indicators and eight operation keys. The standard compatible input upper cassettes paper types include ledger, legal, letter, and executive. Apart from the standard sizes, the machine is also compatible with custom sizes. It also supports a paperweight between 17 and 28 lbs for its average bond weight. Download Canon LASER SHOT LBP5960 Printer driver from Canon Website