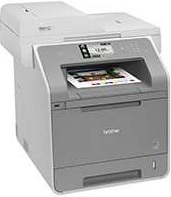 The Brother MFC-L9550CDW model printer is similar to the MFC-L8650CDW and MFC-L8850CDW but only differ in a few characteristics. In one way, they are all using the latest laser print technology of the electrophotographic type with a single pass. The standard internal memory of the printer is about 256 MB of RAM with an optional slot for DDR2 SO-DIMM for up to 256 MB. The display feature of the device includes a 4.85 inches TFT color touchscreen and touchpanel.

Furthermore, the printer uses a power source that supplies a range between 220 to 240 volts of an AC at 50/60 Hz. In other words, any power supply outside of this range is not safe for the device. Similarly, the power consumption by the printer is a function of the present condition of the printer. For example, at peak performance, this printer consumes approximately 1200 watts of power.

The copying process uses about 565 watts as well including the quiet mode with 365 watts power usage. In terms of the printer’s physical dimensions, the width of the printer is about 490 mm, and the height is about 530 mm. Also, the depth of the device is about 526 mm, and the weight is about 31.0 kg — the amount of noise in the invention also concerns the ongoing printing process. The operating temperature range is also between 10 and 320C. Download Brother MFC-L9550CDW driver from Brother website