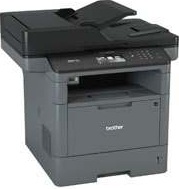 The Brother MFC-L5850DW printer uses the laser printer technology that ensures the user gets the best output. The printer performance is also very outstanding in many other models in the same family series. Other similar models in this family series include the MFC-L5650DN, MFC-L5900DW, MFC-L6700DW and MFC-L6800DW. Others include DCP-L5500DN, DCP-L5600DN, and MFC-L5700DW models. The internal memory capacity of this particular model is about 256 MB of RAM.

The printer also has a liquid crystal display (LCD) which is a significant display component on the control panel. This component measures about 3.7 inches in diagonal size and has a TFT color touchscreen. Furthermore, the power component of the printer has a recommended range between 110 and 120 volts of alternating current (AC). The various tasks that the printer carries out determine the amount of power that the printer consumes per time.

For example, the printer’s peak performance has a demand of up to 1248 watts while printing and copying require 630 watts. This amount of power is lesser when printing and copying are in the quiet mode at 375 watts at a temperature of 250C. When the printer is an effective way, it uses approximately 36 watts of power and 8.4 watts at sleep mode. At power off in the plugged-in printer, the power usage is about 0.03 watts.