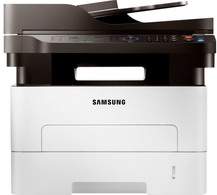 The printer, Samsung Xpress SL-M2885FW model, uses laser print technology while it displays with an LCD screen in 2 lines. The duty cycle of the machine is up to 12000 impressions at maximum productivity in a month. At the same time, the device supports scan to folder or scan to network. It also supports the wireless-ready ability with mobile printing features such as Apple AirPrint and Google Cloud Print. The machine is also a multipurpose device with the knowledge of printing, scanning, and copying.

The standard internal memory of the machine is up to 128 MB with an enabled AirPrint feature. At the same time, the first printout page comes out in less than 8.5 seconds. The capital consumable in the machine is a black toner cartridge that can print up to 1200 pages of work. In terms of power consumption, the sleep mode uses about 1.6 watts. Besides that, the standby mode uses about 45 watts while the maximum operational usage consumes 400 watts of power.

When copying, this Samsung Xpress SL-M2885FW machine runs at the speed of up to 29 pages per minute (ppm) at optimum performance. On the other hand, the first copy out time is 14 seconds, with an enlargement range of 400%. Whereas, it can also reduce the image of the copy output to about 25% of the original document size. This unique printer also has EPEAT compliance as well as ENERGY STAR certification. The print resolution is up to 4800 x 600 dots per inch (dpi) and a speed of 29 ppm.

The supported print drivers include the Samsung Printer Language (SPL), PCL 6, and PCL 5e. Its security protocols and features include the WPS and Wi-Fi Direct. Also, the typical sound emission during operation is about 50 dBA. The machine also supports the use of MS Windows and Mac OS versions. Download Samsung Xpress SL-M2885FW driver from HP website