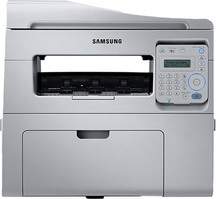 The Samsung SCX-4650 printer is the first member of the Samsung SCX-4650 printer series with a processor of 433 MHz speed. Also, it displays with a liquid crystal display (LCD) that shows a two-line with 16-character support. Connectivity is through one of three basic options, with the primary being the hi-speed USB 2.0 port. Another means of connecting with this printer is through the Ethernet 10/100 Base-TX interface.

Apart from the Windows OS versions, the other compatible versions include Mac OS X 10.4 to 10.7. Then, it is also compatible with various Linux OS versions. This machine weighs 9.6 kg, which is equivalent to 21.2 lbs. Furthermore, the printer dimensions include a width of 410 mm, a depth of 295 mm, and a height of 388 mm. When printing, the machine uses up to 450 watts of power and about 1.1 watts when at the sleep mode.

Besides, the power consumption for the standby mode is about 65 watts. In the printer package is an average yield black cartridge of about 2500-page capacity. But ideally, the machine contains a 100-page capacity starter toner cartridge. All the details of the cartridge capacities are following the ISO/IEC 19752 standards. This printer has an input capacity of about 250 sheets in the standard tray with one extra sheet for the manual plate. Download Samsung SCX-4650 driver from HP website