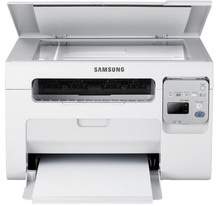 This device is a digital device with a laser print technology, which enhances productivity at its optimum performance. It also has a display component that has two lines and 2 LEDs to indicate the printer status per time. Furthermore, this machine can produce up to 10,000 impressions in a single month. Whereas, it can scan to folder or scan to a network through its up-to-date scanning technology that forms an impressive quality.

Connectivity to this device can be through the usual USB hi-speed 2.0 port or the wireless connection. It also has an internal memory of 64 MB of Ram, which is non-expandable. Besides that property, the first print out time takes less than 8.5 seconds. Inside the printer package also is one black cartridge that can produce up to 700 pages of plain paper. The measurements are according to the ISO/IEC 19752 standards that regulate printer models.

The maximum print consumption during the printing operation is about 310 watts. Besides that, the Samsung SCX-3405 printer can use as low as 1.6 watts when in sleep mode. And when the printer is in the standby mode, the power consumption is up to 30 watts. During the copying function, the rate is up to 21 pages per minute (ppm) for black and white production. Besides, the first page in the copying mode is as fast as 14 seconds.

Furthermore, this machine can enlarge a copy to the extent of 400% while the reduction is as low as 25%. Then, from a single original document, the machine can produce up to 99 copies with an ID copy mode support. This printer is an energy star certified device that ensures that it is safe for use in the environment. The machine also supports various versions of MS Windows OS, Mac, and Linux OS. Download Samsung SCX-3405 driver from HP website