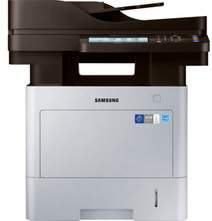 Samsung ProXpress SL-M4080FX model is a professional printer with many fascinating features with laser print technology for efficient printing. In a month, the Samsung ProXpress SL-M4080FX model can also print up to 120,000 pages at optimum capacity. However, the manufacturer recommends only a range between 2000 and 12000 pages in a month. The outstanding machine features include scan to e-mail, scan to folder, 10-key numeric keypad, fax to e-mail, and mobile printing.

Other features include Samsung Cloud Print ready, fax to SMB, fax to FTP, IPP printing, and the PrinterOn Print. There is a control panel on the body of the printer with a liquid crystal display (LCD) screen of 7inches. The mobile printing features of this machine include Apple AirPrint, Google Cloud Print, Mopria Print Service, and Wireless direct printing. It has a standard internal memory of 1 GB, but the maximum supported memory can reach 2 GB.

Whereas, the hard disk drive will take up to 32 GB. The included consumable includes a black cartridge of up to 6000 pages capacity for monochrome printing. The enabled printer is also capable of power consumption that varies according to the printer state. For instance, the sleep mode of the printer allows about 1.2 watts, while standby uses 50 watts of power. However, the operational power consumption at maximum usage is up to 700 watts of power.

The details of printing and copying are up to 42 pages per minute (ppm) for using letter-sized paper. But when an A4 essay is in use, the two processes will run at the rate of 40 ppm. However, the scanning process will run at a speed of 35 ppm for both black/white as well as color scanning. The automatic document feeder (ADF) will accommodate up to 50 sheets of plain paper. Download Samsung ProXpress SL-M4080FX driver from HP website