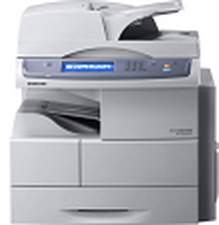 The Samsung MultiXpress SCX-8025ND model is a fantastic choice of printer for users that appreciate the excellent speed and quality. It can print, copy, scan, and send or receive fax messages. The machine uses a laser print technology that can produce up to 200,000 pages in a single month. Other machine features include saving to USB flash drive, scan to e-mail, scan to network, to FTP, or SMB. It displays the status of the printer in an LCD touchscreen control panel.

The machine has a standard internal memory is about 256 MB of RAM but expandable to 512 MB. It has a hard disk of up to 80 GB of space to enhance the printer’s overall performance and speed. To perceive the printer speed, the user must consider the status of the printer. For example, the rate of copying with this machine reaches up to 45 pages per minute (ppm). Also, its resolution is up to 600 x 600 dots per inch (dpi) at maximum quality.

The same model takes less than 5 seconds to produce the first page of the copying process. Also, it can enlarge the copy image to the extent of 400% of the original size of the document. However, the reduction of the same image can only reach 25% of the original scope of the material. Samsung MultiXpress SCX-8025ND model has an automatic duplexing feature and can produce up to 99 copies from a single original.

This device also has an energy star rating, which ensures that the printer remains very safe for the environment. Printing speed and resolution is the same as that of the copying process; 45 ppm and 1200 x 1200 dpi, respectively. It supports the use of the following drivers and emulations; PCL 5e, PCL 6, postscript 3, TIFF, and the pdf v1.7. Download Samsung MultiXpress-SCX-8025ND driver from HP website