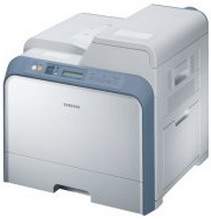 The printer is suitable for both color as well as black and white printing with various print speeds according to the paper size. Both kinds of printing run at the rate of 20 pages per minute (ppm) for A4 and 21 ppm for letter size. The warm-up time for the device is less than 45 seconds, while the first print out time is about 20 seconds. Also, it has a resolution that is up to 2400 x 600 dots per inch (dpi).

In terms of the power rating, the Samsung CLP-600 printer has two categories, and one uses the 110 to 127 volts with 9 A current. The other, however, support a range between 220 to 240 volts with 4.5 A current and 50/60 Hz frequency. Also, the average power consumption reaches up to 450 watts during operations, and less than 35 watts in power save mode. It also produces a noise level that is less than 50 dB (A) when printing and less than 32 dBA during standby.

The available consumables in the printer package comprise of four different cartridges. The approximate capacity of the cartridges is 4,000 A4/letter pages at 5% coverage limit. However, for starters, the print capacity is just 2000 pages. In total, the total monthly capacity of the machine is about 35,000 pages. This machine itself weighs about 3.5 kg while the plastic container weighs 900 g. The user interface for this model of the printer includes the standard USB 2.0 port.

Furthermore, the printer’s physical dimensions are 465 mm in width, 445 mm in height, and 465 mm in depth. The operating environment requires a temperature between 10 and 32.50C and humidity between 20 and 80% RH without condensation. It also supports the Samsung Printer Language Color (SPL-C) print language. Users will also enjoy a 32 MB of RAM as non-expandable storage that combines an effect with the processor. Download Samsung CLP-600 driver from HP website