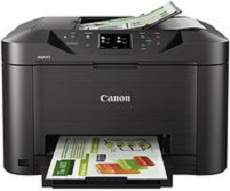 The Canon MAXIFY MB5070 model belongs to the MAXIFY printer family series, which has exceptional qualities of interest to users. For example, the maximum printing resolution for output documents is about 600 (horizontal) x 1200 (vertical) dots per inch (dpi). In terms of the user interface options, users can choose from the hi-speed USB 2.0 port and a flash drive. Other options include the wired LAN with 10/100Base-T/TX and a wireless LAN IEEE802.11 b/g/n component.

The supported print width of the machine during bordered printing is about 8 inches, about 203.2 mm. At the same time, it demands certain conditions in the environment, such as temperature and relative humidity. For instance, when the printer is in use, the recommended temperature range is between 5 and 350C. By the way, the acceptable range of the moisture is between 10 and 90% with no dew condensation.

When the machine is still in storage, the relative humidity remains within 5 and 95%. Whereas, the recommended temperature in that condition is between 0 and 400C. These standard rates imply that the printer may underperform under specific temperature and humidity. The machine power supply is through an internal amount within 100 and 240 volts at 50/60 Hz frequency. On the other hand, the power consumption depends on the present printer qualities.

For instance, printing or copying requires power usage of about 29 watts, while the standard model uses 1.0 watts. But when the machine is in the ‘’off’ mode, the power usage is about 0.3 watts. Users can note that the device will switch automatically to the standby mode if it stays idle for some minutes. But the wait time for the standby mode is not changeable as long as it remains in contact with power. Download Canon MAXIFY MB5070 driver from Canon Website