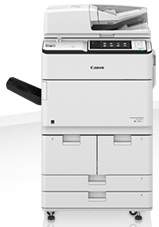 The Canon imageRUNNER ADVANCE 6575i model is a multifunctional printer with the ability to print in black and white only. As its core functions a monochrome device, including printing, copying, scanning, sending, storing, and faxing (an optional feature). Besides, the rate of printing depends on the processor, which is a Canon dual-custom processor. This processor, on the other hand, depends on the shared memory of the printer itself.

The printer body is also a TFT liquid crystal display (LCD) screen with WSVGA and a color touch panel. This component has a control panel that is about 25.6 cm wide, which is 10.1 inches. The internal memory of the Canon imageRUNNER ADVANCE 6575i model is about 3.0 GB of RAM. Whereas it possesses a hard disk drive size of 250 GB, but the maximum is 1 TB. Mirroring hard disk drive has an optional memory of 250 GB or 1 TB through the Raid memory method.

The options include a network standard of 10/100/1000Base-TX and a wireless component while connecting to the printer interface. Likewise, the wireless piece has a wireless LAN IEEE 802.11 b/g/n with an optional near field communication (NFC). It also has the standard USB 2.0 host and device components with uncommon options like serial and copies control interfaces. By standard, the machine paper input capacity is about 1500 sheets in each of the two main paper trays.

Furthermore, it can accommodate an additional optional tray, which will take up to 3500 sheets of paper. This particular tray has the POD DECK LITE-C1 or the PAPER DECK UNIT-E1. The machine can hold up to 7700 sheets of plain paper at 80 gsm average weight. On the flip side, the paper output holding capacity is not more than 500 sheets at once for the shift tray. Download Canon imageRUNNER ADVANCE 6575i driver from Canon Website