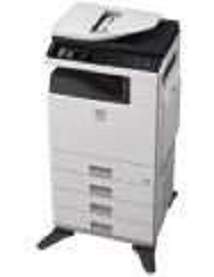 Sharp DX-C310FX printer has a digital outlook with its multifunctional ability. It also has an automatic document feeder of up to 50 sheets as an extra input. The essential functions of the printer apart from printing include scanning, copying, and faxing. These features work for both colors as well as black and white documents. Also, the Sharp DX-C310FX printer model has a standard internal memory of 512 MB.

In addition to the internal memory, the machine also has a hard disk drive storage capacity of 80 GB. More so, its maximum operational power consumption is up to 1440 watts while printing. At the beginning of switching on the printer, it takes about 90 seconds to warm up and be ready. Also, the Microsoft certifications, this machine is compatible with Windows 7. It is also a printer that is suitable for use in the environment, earning an Energy Star certification.

In terms of other printing features, the resolution is up to 1200 dots per inch (dpi) for color and monochrome. It also runs at the speed of 31 pages per minute (ppm) and printer emulation of PCL 6. Connection interface options include the standard USB 2.0 hi-speed port and a Gigabit LAN port. Besides, its network protocols include the TCP/IP and Sharpdesk software support. The maximum paper size is the legal paper standard size.

On the other hand, the copying rate is up to 31 ppm as well for both monochrome and color copying. When the machine is at an optimum state, the copying resolution cannot be more than 600 dpi. It also supports up to 256 levels of grayscale half-tones. When copying, the machine can enlarge the output up to 200% of the original size. On the other hand, if copying demands reduction, it can reduce up to 20% of the original dimension.