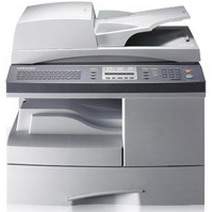 Samsung SCX-6322 printer model belongs to the Samsung SCX-6320 printer family series that uses laser print technology. It can also produce up to 20,000 pages in a single month while using the plain paper. The control panel comprises a liquid crystal display (LCD) screen that shows two lines and 20 characters. It also has a standard internal memory of 64 MB of RAM that is non-expandable. This feature supports the inbuilt processor to ensure that the printer performs at optimum capacity.

The standard means of connectivity include the USB hi-speed 2.0 port or through the Ethernet LAN wired component. In terms of the multifunctioning qualities, the printer can not only print but also copy, scan, and fax messages. In terms of the Microsoft certifications, it supports Windows Vista as a standard OS version. The required consumable in the printer package includes a black toner cartridge that can print up to 8000 pages.

It also has a drum that can print up to 20,000 pages with a model code of 6320R2. Then, the first copy out time is less than 13.5 seconds. The power consumption of the machine in the sleep mode is up to 28 watts, and the standby mode uses 100 watts. On the other hand, the power consumption for full operation is up to 450 watts of power. The copying rate is up to 22 copies per minute (CPM), while the resolution is up to 600 x 600 dpi.

The warm-up time for this device is less than 25 seconds, while the maximum copies can reach 999 copies. It can also enlarge the size of the output image of up to 400%, and reduction is up to 25%. Then, it supports printer emulations such as PCL 6, postscript 3, and the Samsung Printer Language (SPL). Download Samsung SCX-6322 driver from hp website