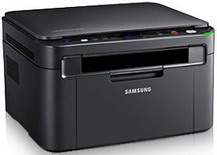 +In a detailed overview, the printer can print, copy, and scan documents with exceptional specifications. Printing is at the resolution of up to 1200 x 1200 dots per inch (dpi) for productive output quality. Its rate is up to 16 pages per minute (ppm) when printing on an A4 paper. Then, there is a duplex printing component for printing on both sides of the article. The first print out time is less than 8.5 seconds.

The printer language emulations include the Samsung Printer Language (SPL) and the PCL 5e. At the same time, the first copy out time is less than 10 seconds after issuing the command. It supports the ID copy feature and has s resolution of up to 1200 x 1200 dpi for productive output. While copying, this model will produce up to 99 copies from a single original at a speed of 16 CPM. By the way, Samsung SCX-3206 has a liquid crystal display (LCD) screen for 2-digit LEDs for the printer status.

Scanning with this device is with the color CIS scanning component, which can send to the PC. Also, it is compatible with the TWAIN and WIA standard methods with an optical resolution of 1200 x 1200 dpi. On the other hand, the enhanced scanning resolution is up to 4800 x 4800 dpi. Whereas, the machine has an internal memory if 128 MB that is not expandable. Paper handling relates an input capacity of the input tray of 150 sheets of plain paper.

On the other hand, the output capacity of the printer is about 50 sheets in a face-down pattern. In terms of OS compatibility, the supported versions include MS Windows 200, XP, Vista, 7, 2003 server, 2008 server. Other compatible OS versions include Mac OS 10.3 to 10.6 and various Linux OS versions.