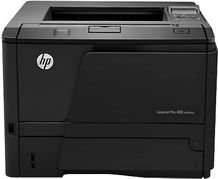 There is a reputation that mono printers have gotten of being rather dull and uninteresting. However, thanks to the addition of color LCD screen and a few other nifty features, HP has been able to raise eyebrows with the LaserJet Pro 400 M410dne. All in all, you shouldn’t be disappointed with this one.

Just as it is with the M401n, the M401dne printer manufactured for the primary function of meeting needs of small and micro offices, workgroups, and so on. However, regardless of this primary use, this printer can also be used for home offices and people who have heavy-duty prints.

The printer is also much quieter than most of the other printers of its age, with a peak sound of 61 dBA. You can make use of it in office spaces without having to disturb the productivity of other staff members.

Unsurprisingly, the M401dne is identical to the M401n in more aspects than just dimensions. For instance, its speed has been rated by HP as 35 pages per minute; the speed that you will most probably see when you are printing text files without any form of formatting.

This printer doesn’t do well in the design department. The design lacks the short and straightforward feature that a lot of printers seem to have adopted today.

The HP printer LaserJet Pro 400 M410dne is only able to make prints in the black and white format. That, in itself, is already a disadvantage, but you also have to commend it for its printing speed of 35 pages per minute and printing resolution of 1200 x 1200 dpi. It also provides the duplexing service, and I has a maximum printing size of A4.

The HP LaserJet Pro 400 printer M410dne comes with a 250-sheet paper drawer and a multipurpose tray that can accommodate up to 50 sheets at once. It is also possible for you to add a 500-sheet second tray although it would cost you extra If you need to add more holding capacity.

This HP LaserJet Pro 400 M401dne driver works with both PCs and Mac-based systems. As long as your system can meet the manufacturer’s requirements, you should have no issues with operations.

It is the same size as its “almost twin,” with a 10.5 by 14.4 by 14.5-inch body. With these dimensions, the only issue that you have with using it will be the fact that it might take a little too much space; at least, too much to share a desk.

Another added advantage of this printer is the fact that it provides support for the Ethernet support network. This support will make for printing and operation to be much smoother. However, while Ethernet might try to take its place, wireless support is one thing that every printer ought to have. Sadly though, this one doesn’t.

This printer is just that; just a printer and nothing more. Essentially, this means there are no services or functions such as copying and faxing.

While the printer is only able to provide prints in the black and white format, it is worth noting that it gives these prints in high-quality images are crisp and sharp, and you will enjoy the aesthetic value of this printer.