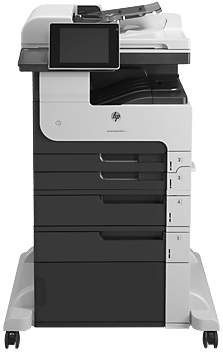 HP LaserJet Enterprise MFP M725f, as the name reads, is a multifunction printer that is capable of printing, scanning, copying, sending and receiving fax messages. The model number of this particular device is CF067A. The printer contains three different trays with varying capacities and two more that are optional. The first tray which is the primary source, holds up to 100-sheet of paper, while the second tray has a 250-sheet capacity.

The supported paper sizes include standard formats such as Postcards, Envelopes, Transparency, Labels, A4 and custom sizes. The compatible accessories that are usable in this device include a fax accessory, staple cartridge, USB cable, and DIMM memory card. The printer also supports mobile printing with compatibility for apps such as HP ePrint, HP Smart Print, Apple AirPrint and Mopria as well as other apps.

The connectivity options for this device include the hi-speed USB 2.0 ports and the 10/100/1000T Ethernet LAN network connection with IPv4 and IPv6. Alternatively, there is also the easy-access USB port for printing and scanning even without the computer. This feature is also helpful in the upgrading of the firmware. The internal memory of this device has a 320 GB HP Performance Secure Hard Disk. Download HP LaserJet Enterprise MFP M725f driver from HP website