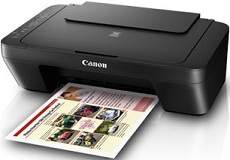 Using the Canon PIXMA MG3070S printer is an indication that the user has an exquisite taste for quality output. As a multifunction machine, it can print, copy, and scan documents with finesse while maintaining quality. It supports some mobile printing options such as Google Cloud Print, Canin Print Service Plugin for Android OS. This machine can also work with the PIXMA Cloud link for connecting the smartphone or tablet with it.

Other essential modern features of the machine include Canon PRINT inkjet/SELPHY for the iOS and the Android. There is also the Canon Easy-PhotoPrint for Windows RT versions for fixed print quality. Canon PIXMA MG3070S is compatible with a digital camera through its PictBridge port for digital cameras, camcorders, and camera phones. Besides, it uses a wireless LAN that can work on JPEG and PNG formats together with layout properties.

The printer power requirements include an internal voltage between 100 and 240 volts for 50/60 Hz frequency. On the other hand, power consumption is a factor of the ongoing process of the machine. For instance, the standby mode uses 1.6 watts, and the ‘off’ way uses about 0.2 watts. In the process of copying or printing, the approximate power usage is about 10 watts.

According to the RoHS and WEEE protocols, the machine is also compatible with use in Chine and the EU. Physically, the Canon PIXMA MG3070S model has a width of 426 mm and a depth of about 306 mm. its height is up to 145 mm while the weight reaches 3.5 kg approximately. According to the system requirements, the machine can work with Windows 10, 8, 8.1, 7 SP1, and Vista SP2 versions. On the other hand, it is compatible with Macintosh OS versions, including OS X 10.8.5 and the later versions. Download Canon PIXMA MG3070S driver from Canon Website