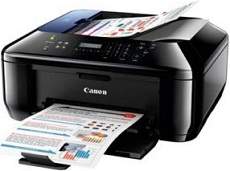 Under general specifications, the Canon PIXMA E600 printer model still stands above many other PIXMA E-series. As a multifunction printer, it is capable of printing, copying, scanning, sending, or receiving fax messages from two media. It can produce the highest print resolution of 4800 (horizontal) x 1200 (vertical) dots per inch (dpi). Whereas, the ink droplet is inside the pitch of 1/4800 inch at the very minimum level.

Similarly, the user interface of the machine includes the hi-speed USB2.0 port, with all factors remaining equal. This same component is compatible with the USB 1.1 version, which also demands the compatible USB cable. In terms of the printer specifications, the weight of the printer is about 8.5 kg, which is about 18.6 lbs. It also has a width of 458 mm, a depth of 385 mm, while the height is up to 200 mm.

This machine also has an automatic document feeder (ADF), which supports A4, letter, envelopes with a maximum of 30 sheets. The recommended paperweight is also about 75 gsm, which is approximately 20 lbs. At the same time, the printer margin per page is up to 4 mm, which is about 0.16 inches. When faxing, it uses the Public Switched Telephone Network (PSTN) applicable line. Also, the communication mode is compatible with the Super G3 processor.

These components support data processing formats such as MH, MR, MMR with JPEG formats for color. It has a modem speed of about 33.6 kbps for the maximum level with an automatic fallback. Similarly, the transmission speed of the Canon PIXMA E600 printer is approximately 3 seconds per page at 33.6 kbps. The supported gradation of the device for black printing is up to 256 levels, and color depth is 24 bit/16bit. It also allows users to adjust the density up to 3 different levels. Download Canon PIXMA E600 driver from Canon Website