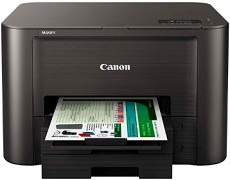 Another exceptional member of the MAXIFY series is the Canon MAXIFY iB4070 printer model with its unique features with quality. It can produce a maximum print quality of up to 600 (horizontal) x 1200 (vertical) dots per inch (dpi). The user interface options include the USB 2.0 hi-speed port and Wired LAN using a 10/100Base-T component. Another option is the wireless LAN that comprises of the IEEE 802.11 b/g/n components.

Setting up this machine could be through the Wi-Fi Protected Setup (WPS), Windows Connect Now (WCN), or the Cableless setup. Users should bear in mind that both the USB and the LAN options are usable simultaneously. However, users can not make use of the wireless LAN and the wired LAN options simultaneously. This machine can use a power voltage range between 100-240 volts at 50/60 Hz as a print-only device.

On the other hand, the printer power consumption is a factor in the printer present working model. For instance, when printing or copying, the power usage is about 27 watts while the ‘off’ mode uses 0.3 watts. But when on the standby mode, the power consumption is about 1.0 watts at the very minimum level. In any case, the waiting period for the standby mode is not changeable for this particular model of printer.

This machine also has a width of up to 18.3inches, a depth of 15.5 inches, and a height of 11.5inches. It has a weight of up to 21.5 lbs, which implies an approximate weight of 9.8 kg. The pressure indicates the presence of the installed print heads and ink tanks. At the same time, the total number of nozzles for the ink tanks is about 4352. This number contains about 1280 nozzles for black pigment print and 512 nozzles each for others. Download Canon MAXIFY iB4070 driver from Canon Website