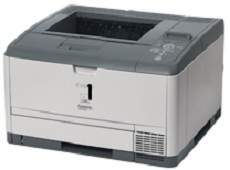 The Canon LASER SHOT LBP3460 model is a desktop laser printer that uses the electrophotography print method for printing. This method is parallel to the on-demand fusing as well as the dry dual-component developing system. When printing on letter-size paper, the rate of work is up to 35 pages per minute (ppm). Also, the standard for the first print time is about 8.0 seconds from the warm upstage.

Besides, when this machine is just powering on, the first print out time takes about 9 seconds. It also has an R4000-333 processor that runs at a speed of 333 MHz. Besides, there is a standard internal memory of 64 MB of RAM, but the maximum reach is 320 MB. In the same way, it has several page description languages, including UFR II, PCL 5e, and PCL 6. These languages produce a resolution that reaches 2400 x 600 dots per inch (dpi).

By the way, Canon LASER SHOT LBP3460 printer model is also compatible with MS Windows 2000, XP, and Server 2003. It also works with Macintosh OS 10.2.8 or later versions to produce the outstanding quality of the print. The connection interface options include the 10/100 Base-TX (RJ-45) network and USB 2.0 hi-speed port. It also displays a liquid crystal display (LCD) screen with 16 characters and one line.

Also, there are 8 LED indicators with eight operation keys for ease of use by the user. In terms of the paper handling specs, the machine is compatible with a legal, letter, executive, and custom sizes. The supported paperweight is between 17 lbs and 35 lbs for bond paper. In addition to these paper sizes, the multipurpose tray can still accommodate statements, index cards, and other formats. This machine also has an Energy Star certification for suitability to the environment.