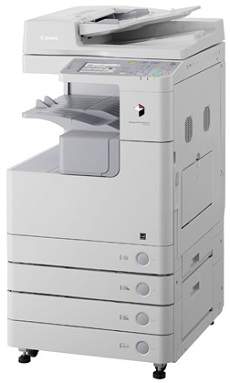 The Canon imageRUNNER 2545 printer model is an outstanding member of the Canon ImageRUNNER printer series. It comes with impressive qualities that can return good value for money to the user. Besides, as a multifunction machine, it can be applied in both personal and commercial working environment. At the same time, it contains a digital imaging system function. Some other features of this machine model include the ability to print, copy, and scan documents.

On the other hand, it also has an optional faxing component and sending color documents. The printer interface comprises an operation panel that is up to 5.7 inches in diagonal size. Besides, the display type is a liquid crystal display (LCD) with a QVGA touchscreen for black and white documents. The image server memory comprises an internal memory of 512 MB of RAM, which is also the maximum. The connectivity options of this machine include a network interface connection for Ethernet 10/100Base-TX.

Other connectivity options include a standard USB 2.0 hi-speed port for host and device. When printing on letter-sized paper, the rate of printing is up to 45 pages per minute (ppm).On the other hand, the legal-sized sheet allows a print rate of 25 ppm. Besides, the ledger-sized paper has 22 ppm speed with a first copy out time of 3.9 seconds. The multiple copies feature from this machine supports a range between 1 and 999 copies. It also has automatic and manual exposure for nine levels.

Furthermore, under the copying attributes, the machine allows a magnification range between 25 and 400%. Whereas, the preset reduction levels include 25%, 50%, 64%, 73%, and 78%. On the flip side, the preset enlargements for enlargements include 121%, 129%, 200%, and 400% of the original document size. Simultaneously, the machine allows up to 550 sheets of plain paper in its standard input tray.