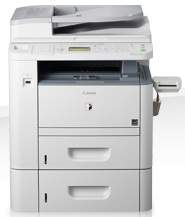 The Canon imageRUNNER 1133iF printer model is a classic choice among the ImageRUNNER series of multifunctional printers. The machine also has a laser print technology that can manage print resources to produce optimum performance. The core features of this machine include printing, copying, scanning, sending, and faxing. The last two elements are peculiar to this particular model among the 1133 printer series.

The print rate is up to 33 pages per minute (ppm) when working on A4 paper size in printing. More so, the maximum print resolution is up to 1200 x 600 dots per inch (dpi). However, this resolution is only achievable with the aid of the enhanced print component. It also supports an automatic double-sided printing for both sides of the page. At the same time, this machine supports printing from memory media through the USB memory key.

On the other hand, the machine can hold up to 50 sheets of plain paper with grouping as one finishing capacity. Some of its supported media types include plain paper, recycled paper, heavy paper, bond, multipurpose tray, transparent films, and labels. Similarly, it supports media sizes such as A4, A5, B5, Letter, legal, executive, statements, COM10, Monarch, and ISO-C5. Besides, in the primary or optional cassette, the supported weight range is between 60 and 128 gsm. Download Canon imageRUNNER 1133iF driver from Canon Website