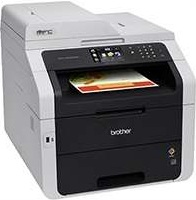 The printer model, Brother MFC-9330CDW, is a multifunction printer with the ability t print, copy, scan, and fax. The LED printer uses the electrophotographic print technology with an internal memory of 256MB of RAM. This feature is all important as it combines with the processor to produce the best quality at a reasonable speed. The printer also has the liquid crystal display (LCD) of 3.7 inches in diagonal size of a color touchscreen and touchpanel.

The power usage is between 220 and 240 volts of AC at a frequency of 50.60 Hz. The power consumption is dependent on the mode of the printer, such as printing, copying, or sleep mode. At peak performance, the printer consumes up to 1200 watts of power while using 375 watts at print. At the copying mode, the power usage is about 380 watts and 70 watts at the active way at 250C. When at the sleep mode, the printer uses 8.5 watts while it requires 1.8 watts at deep sleep and the power off uses 0.05 watts.

In terms of the physical measurements, the Brother MFC-9330CDW model has a depth of 483mm and a width of 410mm. The height of the printer is about 410 mm while the weight is about 23.5 kg. The sound pressure during printing is 53 dB and 33dB when ready for printing. The other conditions that must be in place for printing include a temperature range between 10 and 32.50C. The storage temperature should remain between 0 and 400C.

The recommended humidity involves a range between 20 and 80% for operations without condensation. However, during storage, adequate moisture is between 10 and 90%. The printer supports the use of plain, thin, thick, and recycled papers with a weight range between 60 and 105gsm. The maximum input tray capacity is 250 sheets of plain paper with a maximum weight of 80 gsm. Download Brother MFC-9330CDW driver from Brother website