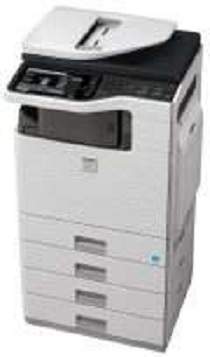 The Sharp DX-C310 printer model is a digital copier that is suitable for the work environment. Some of its features include the basic printing, copying, scanning, and faxing components. The machine supports plain paper usage from the stables of Sharp. The printer has an internal memory of 512, MB as well as a hard disk space of 80 GB. The machine runs on the power consumption of up to 1440 watts when printing.

Sharp DX-C310 model is also compatible with Microsoft Windows 7 with proper certification. At the start of the printer, it takes about 90 seconds for it to get ready for printing. When copying, the machine runs at the rate of 31 pages per minute (ppm) for monochrome and color. On the other hand, the copying resolution is at 600×600 dots per inch (dpi) with 256 levels of grayscale half-tones.

The maximum document enlargement can reach the level of 200% of the original size. On the other hand, the reduction can be up to 50% of the original scope of the document. Also, this feature supports the copying of up to 999 copies from a single original document. The printer also has an energy star certification, which assures users of its suitability to the environment. The printer produces an output resolution of up to 1200 dpi for both color and monochrome as well.

The speed of printing is up to 31 ppm with support for the PCL 6 drivers. In terms of the interface connection, the machine uses the standard USB 2.0 hi-speed port as well as Gigabit LAN. Some of the compatible operating system versions include MS Windows XP, 2000, NT 4.0, Me, 98, Vista, and Server 2003. Apart from Windows OS versions, other OS versions include Apple Mac OS 9, OS X, Novell Netware 5.x, and 3.x.